From West Flanders to Limburg: out of all five Flemish provinces, there’s not one that’s safe from our team at Untranslate. Thanks to two new interns, the Antwerp-based Lindsay Lefeber and West-Flemish Ruben D’haeyere, we can now – five years after our founding – tick off the last two provinces on the list. 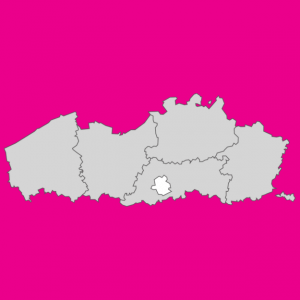 Earlier this year, Elise Haja joined our team, after having gained work experience in Paris and London. In one fell swoop the province of Flemish Brabant and the Brussels-Capital Region – which has now for eight years been her home – were consequently also made part of Untranslate’s dominions. With a little goodwill you could even add Greater London and the Île-de-France.

That does not mean we have to venture abroad to expand our territory further, however. For a few years now, the easternmost province of Flanders has also had its own representative at Untranslate. There, Marlies Hendrickx helps steer things in the right direction from her workplace in Hasselt, situated a few kilometres from her home town of Diepenbeek.

The province that is most strongly represented, however, is the one around Ghent. East Flanders is not only the home of Lisa De Pauw, born and bred in the Flemish Ardennes, but also of Untranslate founder Nathalie De Sutter, who grew up in the nearby Dender Region.

So, as you can see: At Untranslate, employees from all over Flanders are at your service from a distance – and have been from even before the corona crisis!